A post for the photographers! This is for anyone who is new to studio lighting and needs a little help getting setup. It’s a step-by-step guide in picture form of how to setup your Paul C Buff Einstein and PLM umbrella! This is the lighting system I use and I love it (along with many other newborn photographers). First, though, one of the most important things you need to be aware of is the sync speed for your camera. I currently shoot with a Canon 5DMKIV and I know that I can shoot up to 1/200th second with no problems, but if I shoot at 1/250th second you’ll see a black box at the bottom of my pictures. The black part will get bigger the faster your shutter speed gets. I generally shoot at 1/160th in case I accidentally bump the shutter speed during a session.

This was shot at 1/200th second. Nothing is wrong. 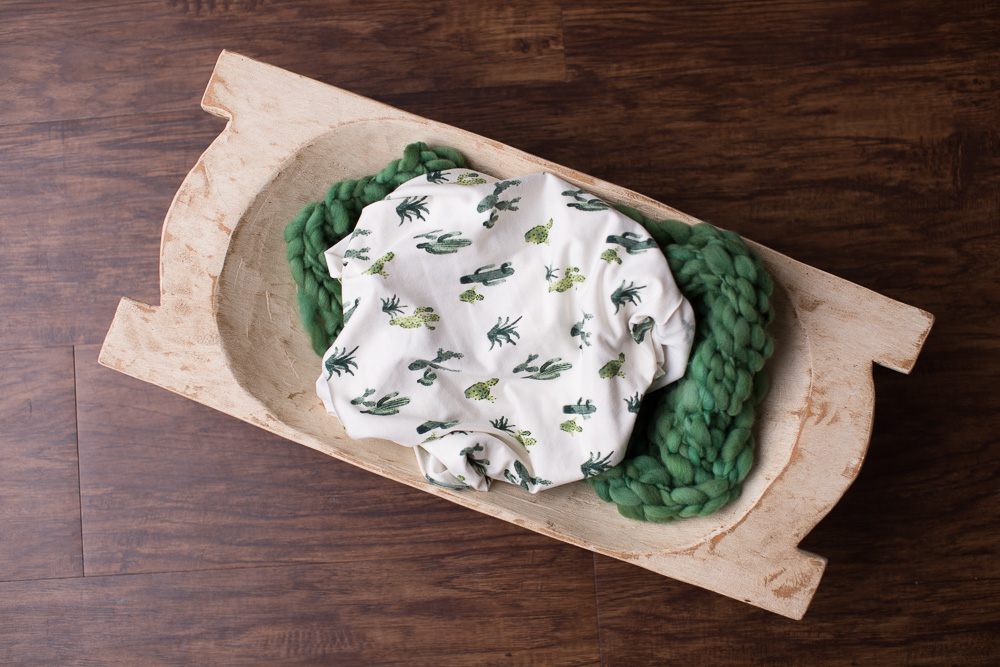 1/250th second. This one can sometimes be easy to miss even if you’re checking the back of your camera. It’s a good idea to lock your camera so you can’t accidentally change the shutter speed. 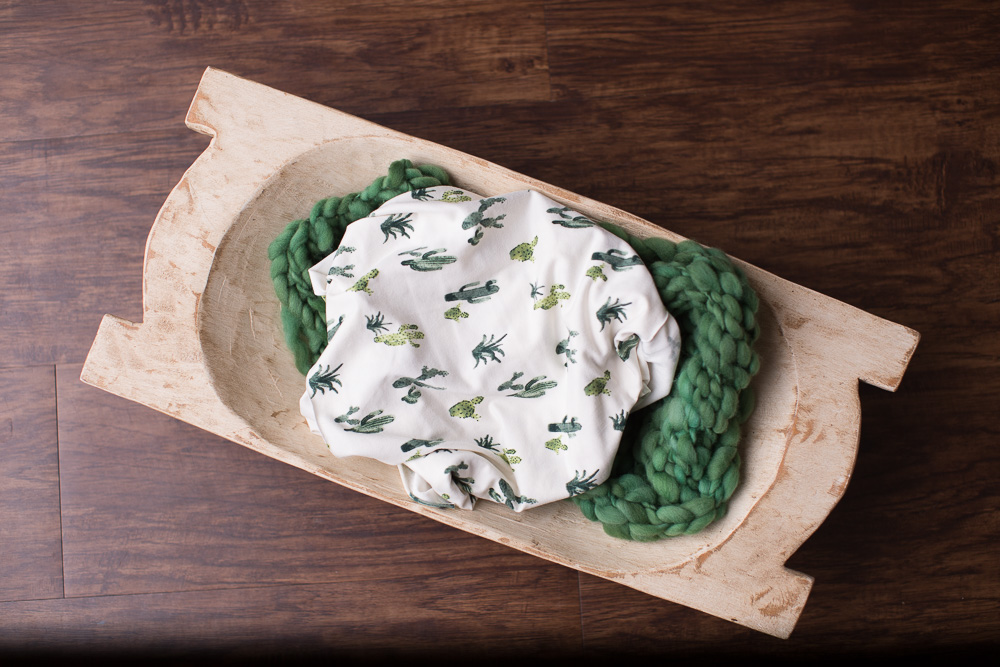 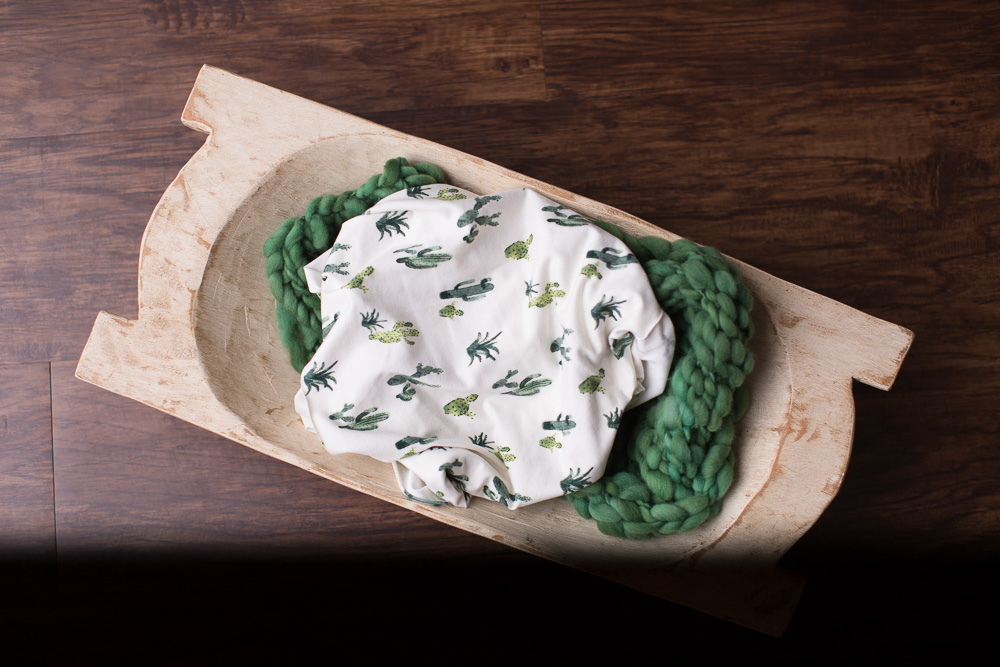 Now, to get started, you’ll need a light stand, of course! I’ve had this one for so many years  I don’t know where I got it anymore. If you have a stand like this you need to have it weighted down. This is not optional. You can get specific bags for this. I’m using my scuba weights because they might as well be used somehow. Just make sure you’re using enough weight, the stand is safe, and it cannot tip over.

*Note, I have since changed my light stand to this one. The base is bigger, but it’s FAR more stable and so much easier to move the light up and down. 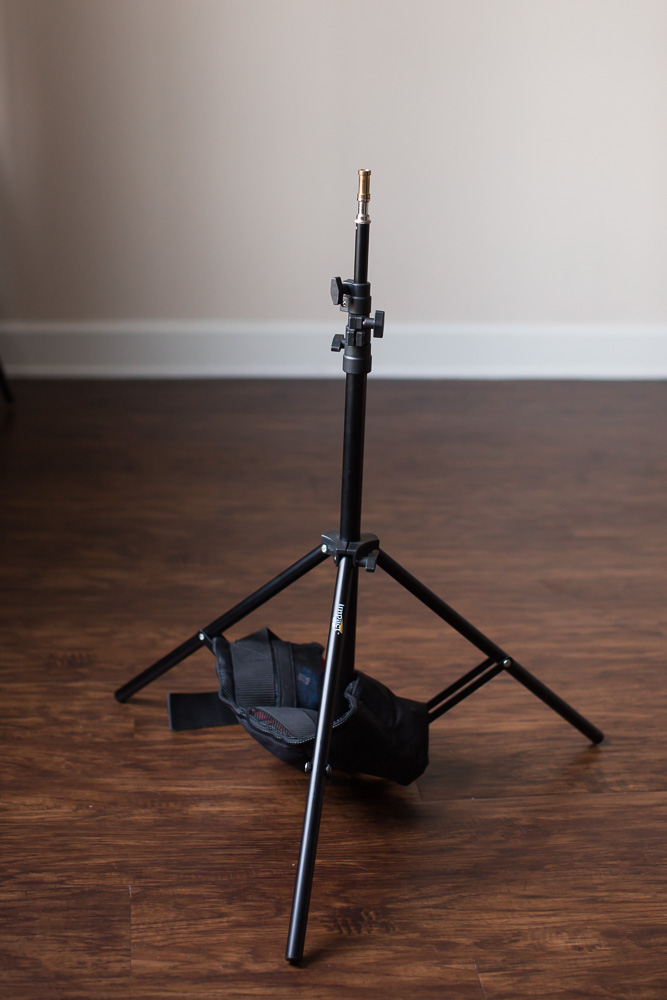 I love this case! If you ever have a need to take down your light or moving it this is great for keeping it safe. 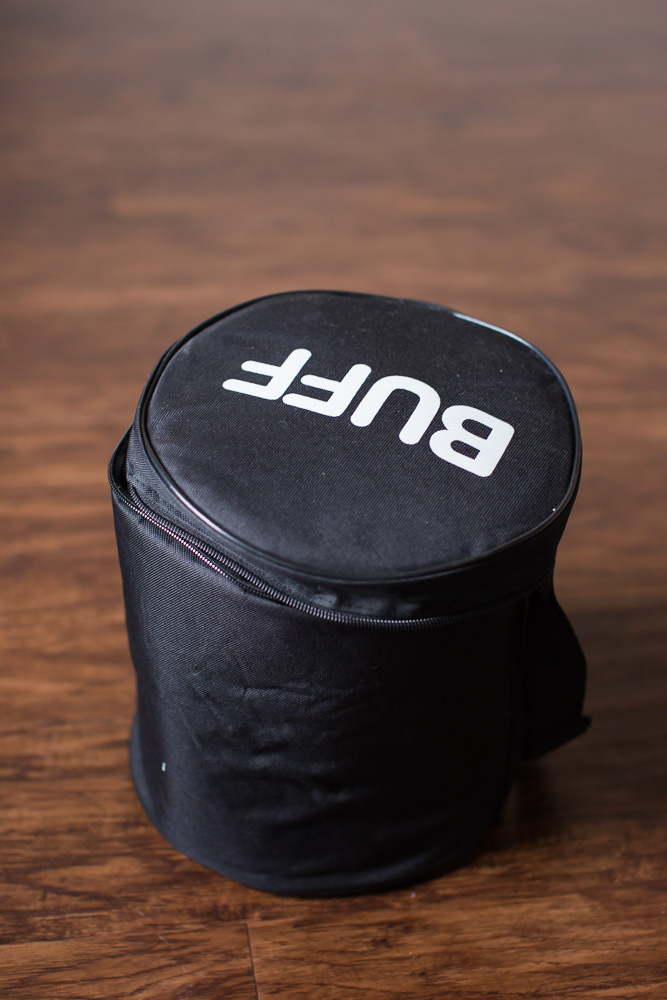 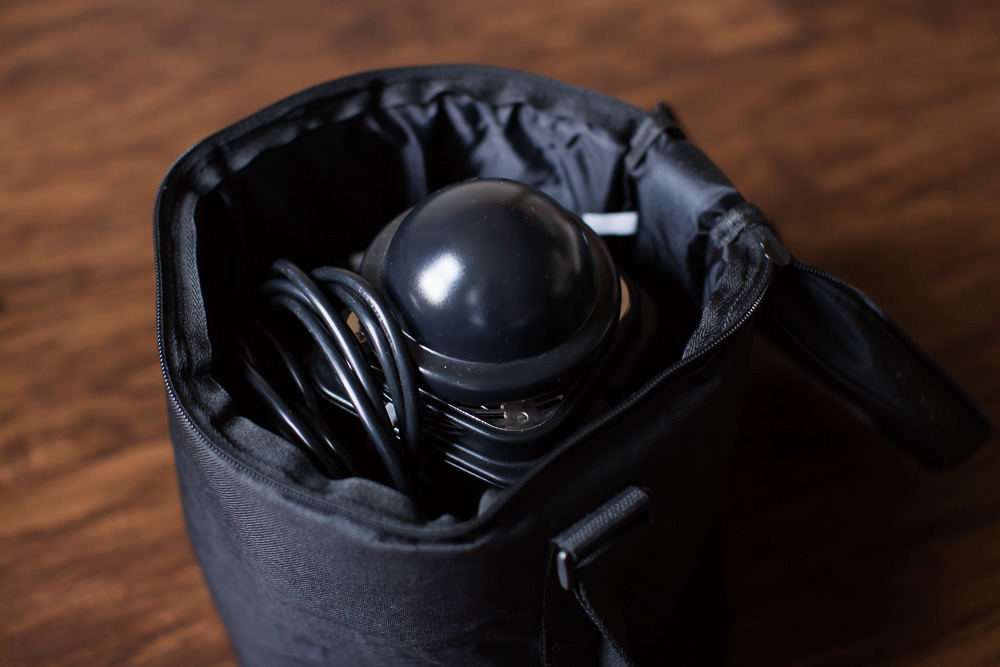 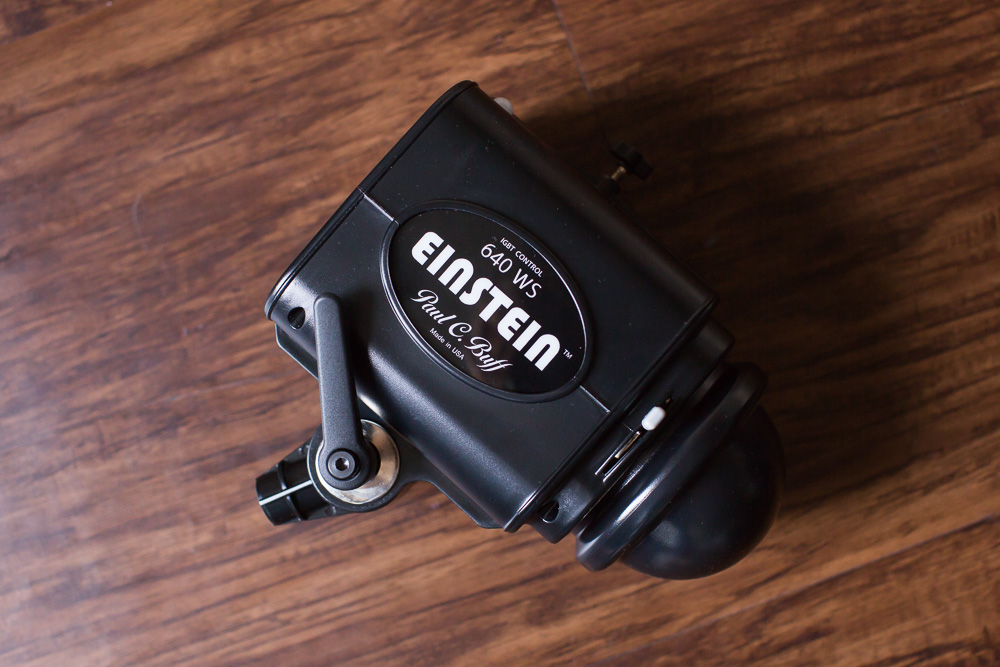 Set it on your light stand and make sure it’s tight and secure! I like to keep it at an angle like this, but I know people who use it straightened out as well. Play around with it! 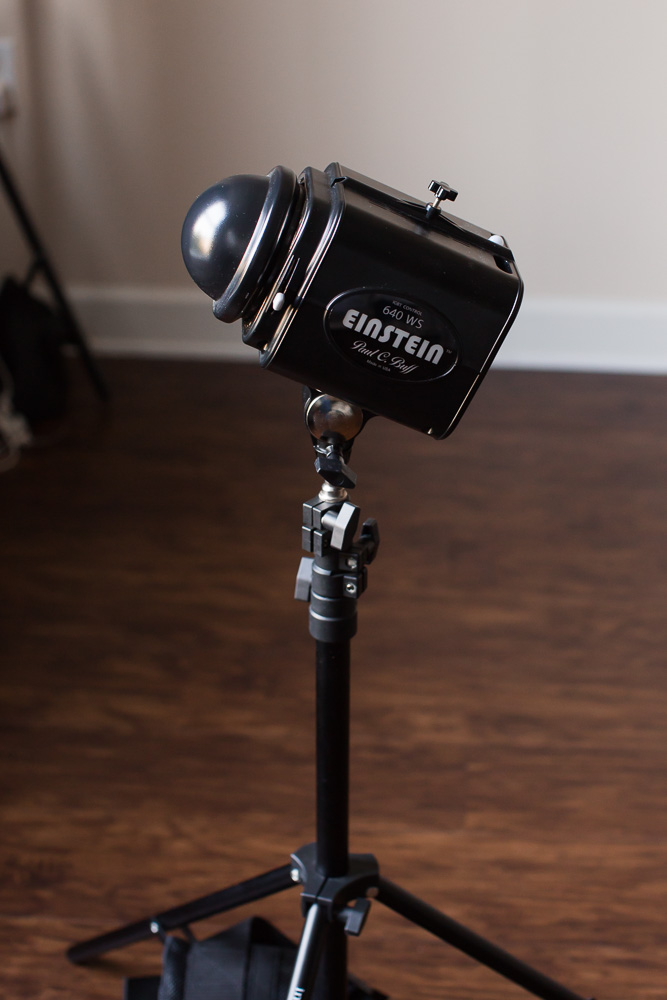 This is important! You’ll need to take this back cover off before you put the umbrella or any other modifier on and before turning the power on. If you don’t take it off the modeling light will heat up and burn a hole in the plastic, which can obviously cause problems. Lift the little lever (there’s one on each side, use two hands for this) and carefully remove the black cover. Keep it in the carrying case or a safe place you won’t forget. 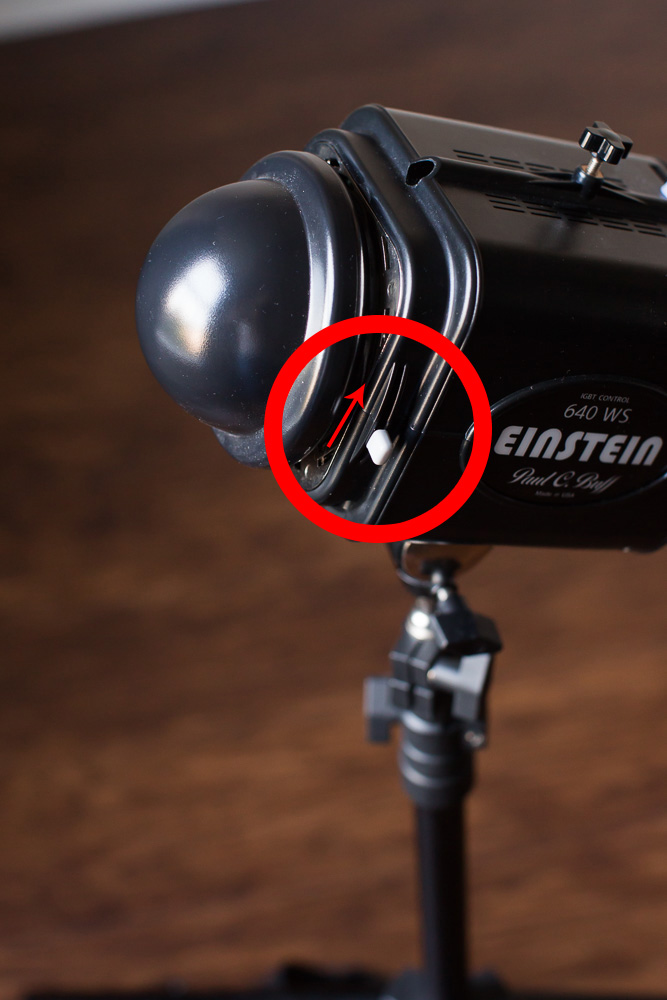 This is where I keep my umbrella when I’m not using it (the case it came with). 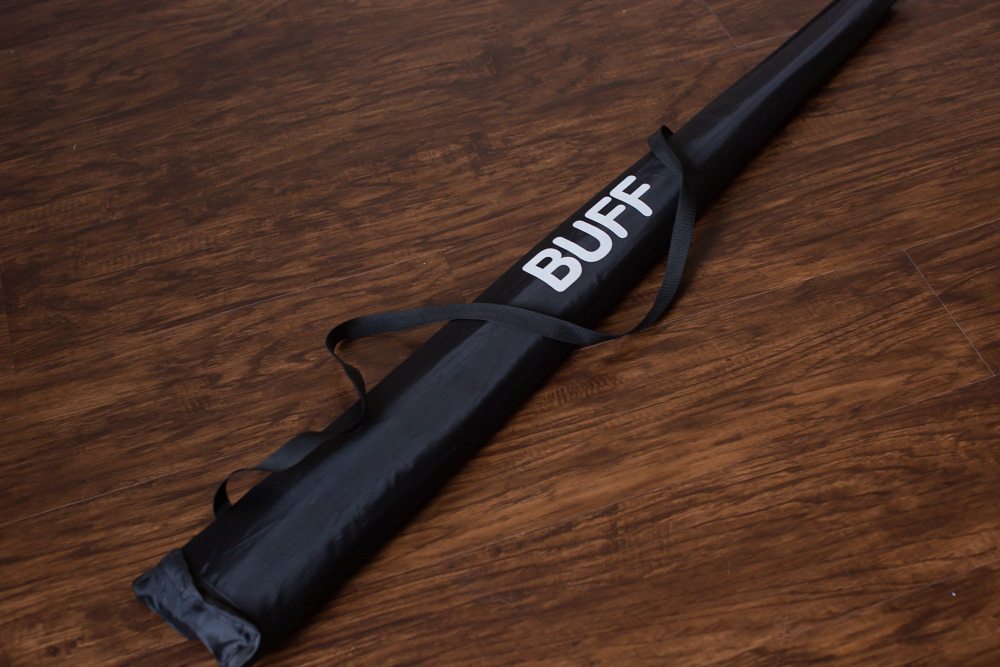 Look at the size of this thing! It really is huge, but there’s nothing better! I have this umbrella and this black cover. Just open it and lock it like any regular umbrella. 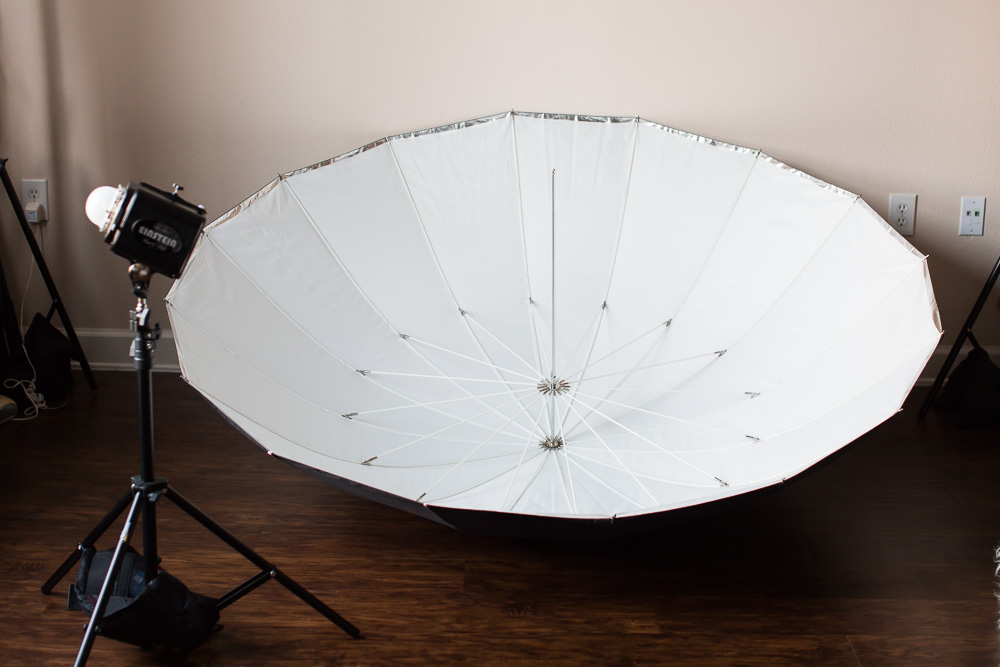 I keep the black cover on at all times. The picture below shows how you secure it to the edges.

Next is the diffuser. I have this one. Put it around the middle and then pull it over the edges a little at a time until you get it around the whole thing. 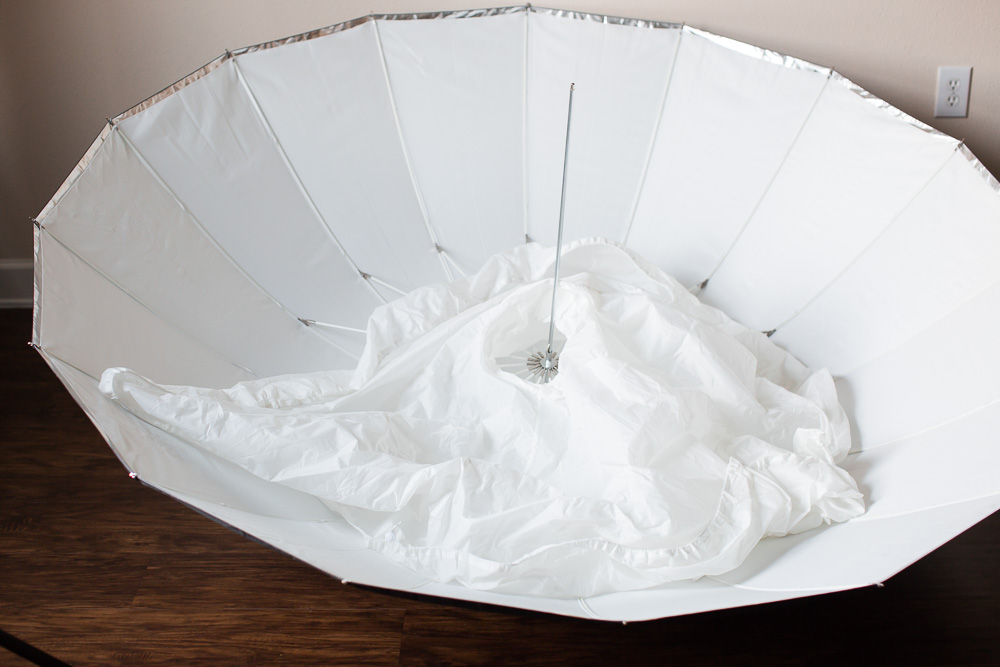 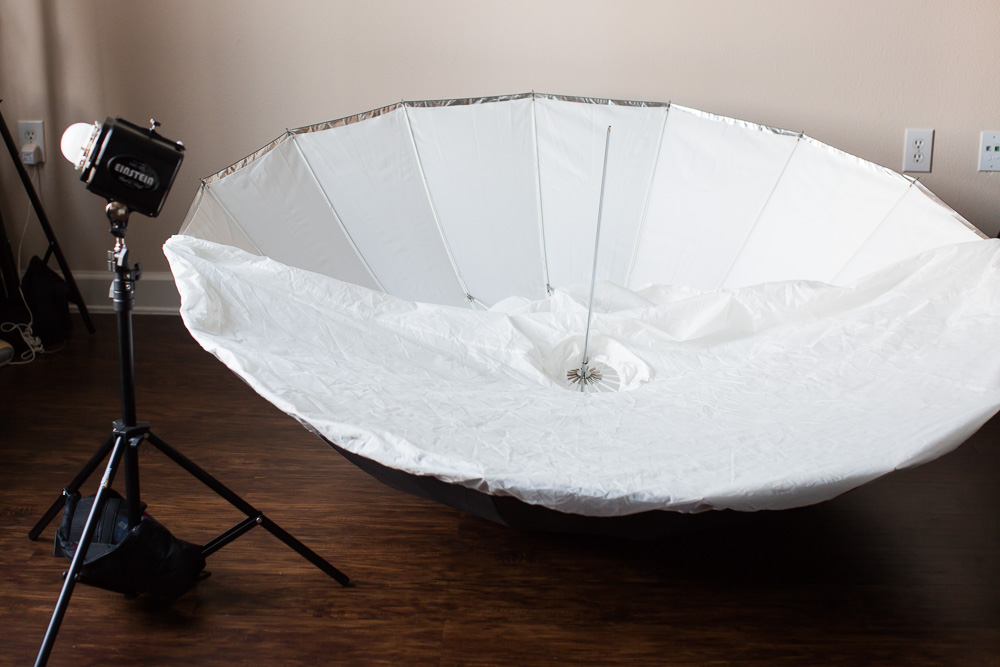 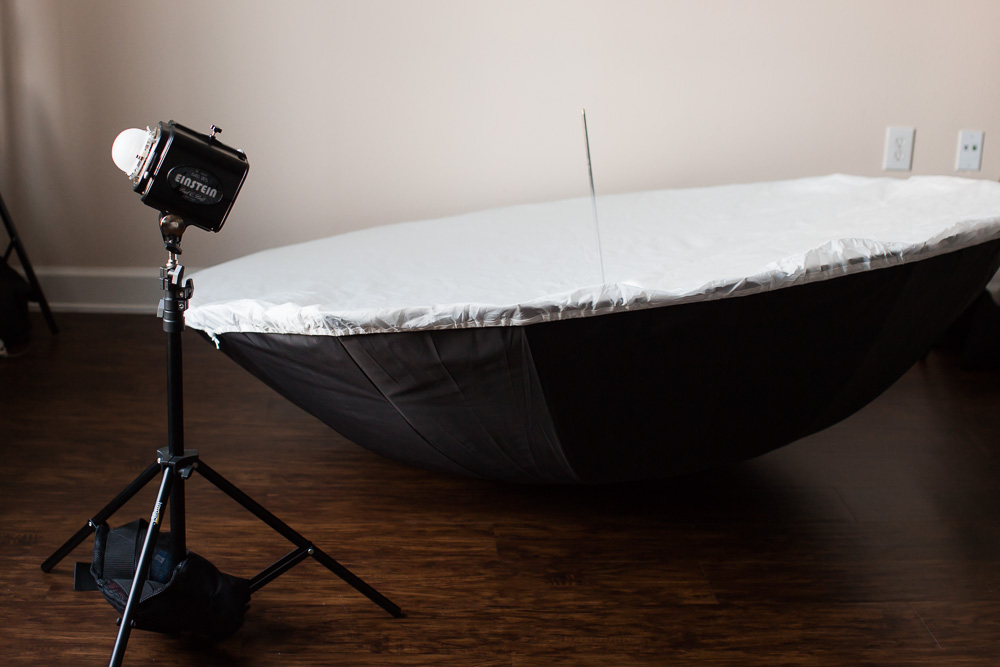 To put the umbrella on the light make sure the top screw is loose so there’s room to fit the pole in and then slide it in! After you do that tighten the screw on top so it stays in place and pull and tighten the diffuser around the Einstein so the light doesn’t burn it.

This sync cord (below) will come with the Einstein. You can use it if you have the right camera for it, but I highly recommend getting a trigger system. The part on the right plugs into the Einstein. 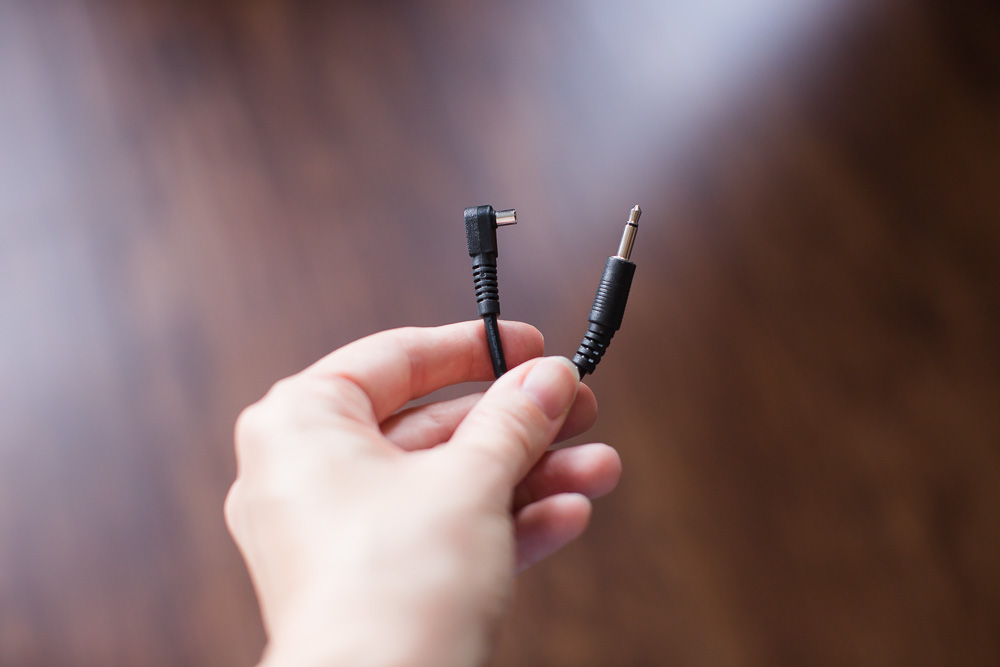 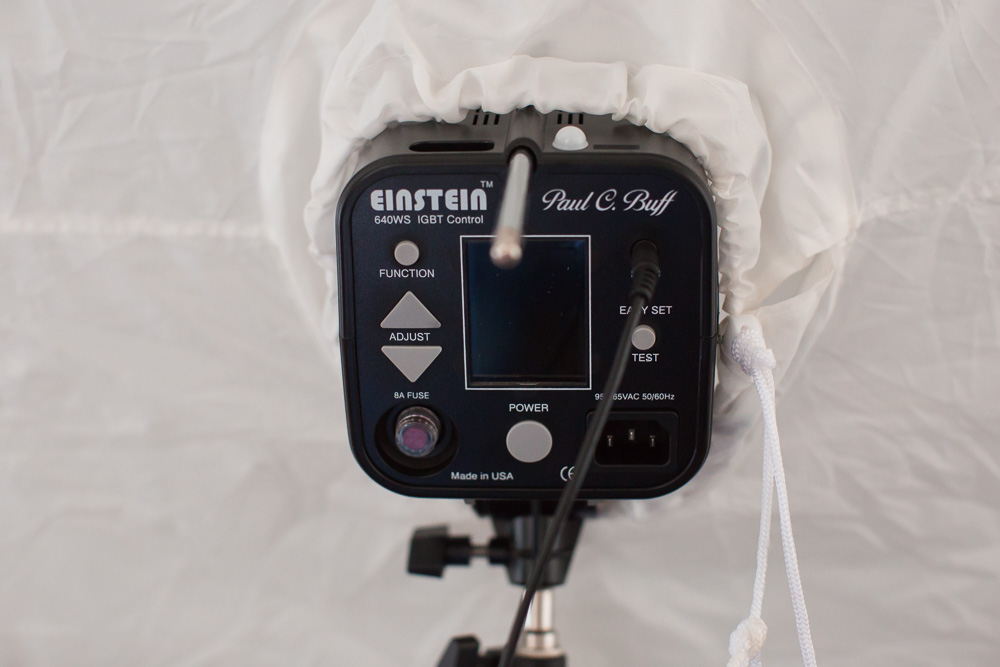 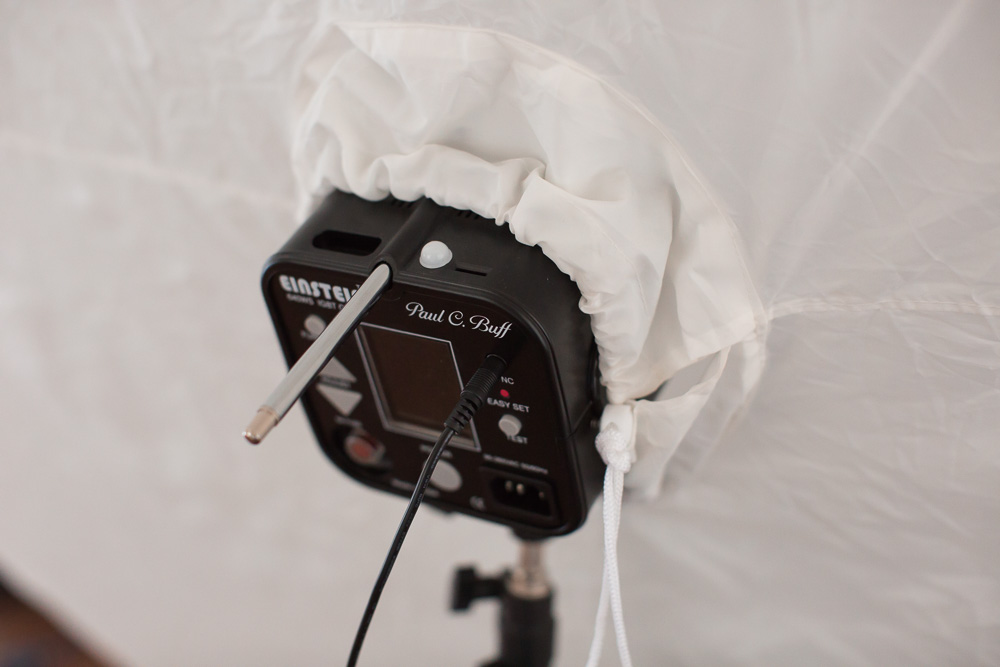 This part plugs into your camera, as long as you have the right port. 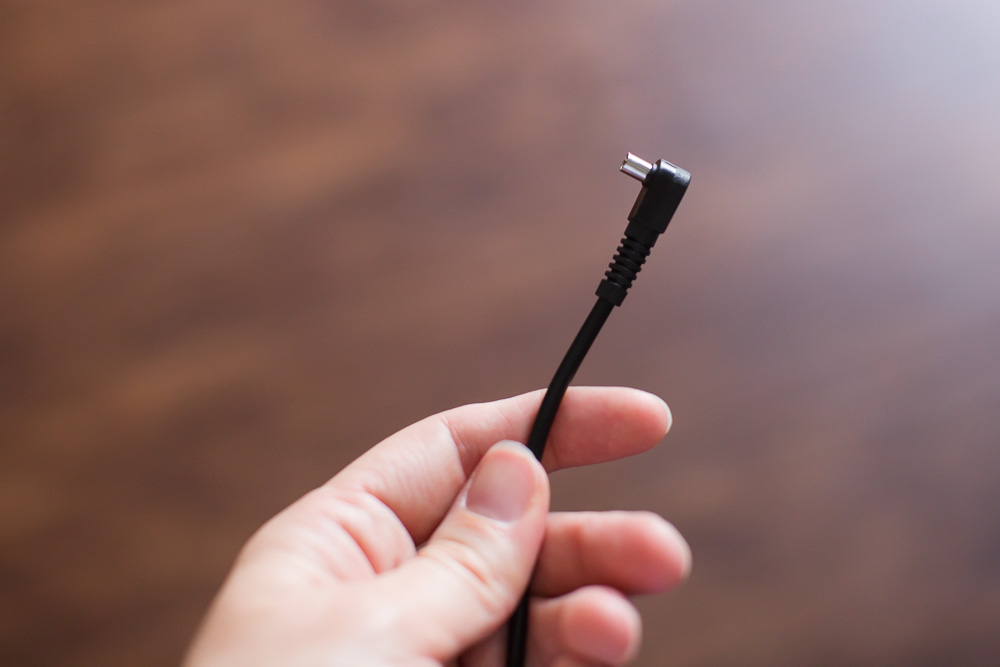 My camera does have it. If you look at the side of your camera look for that little lightening bolt/flash symbol. 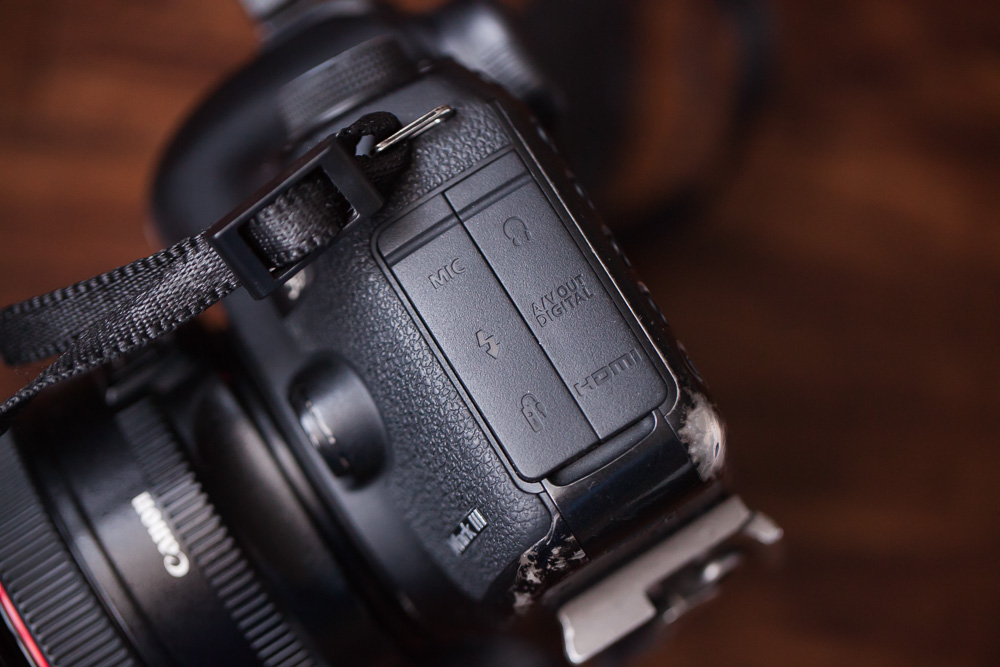 Lift up the flap and that middle port with the lightning bolt/flash symbol is where you plug in the sync cord (the middle port). 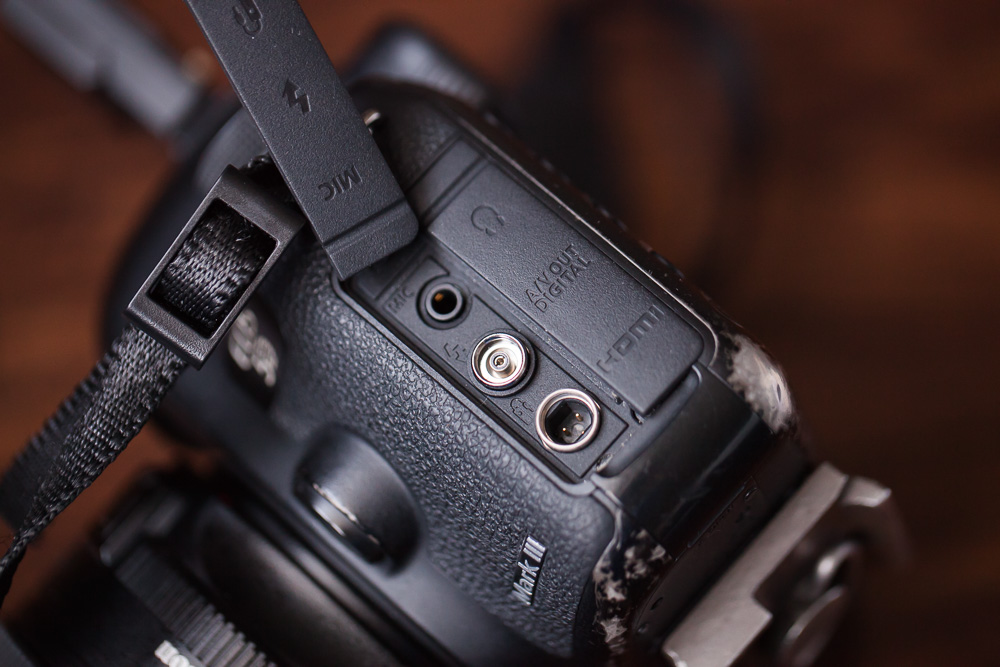 I recommend getting these instead, though! A cord is a pain because it gets tangled in things, kids trip over it and can damage the cord or pull down your light or camera. Unless you’re photographing products or something that never moves, get these. Don’t wait. The transmitter is on the left and goes on your camera and the transceiver is on the right and goes on the Einstein. 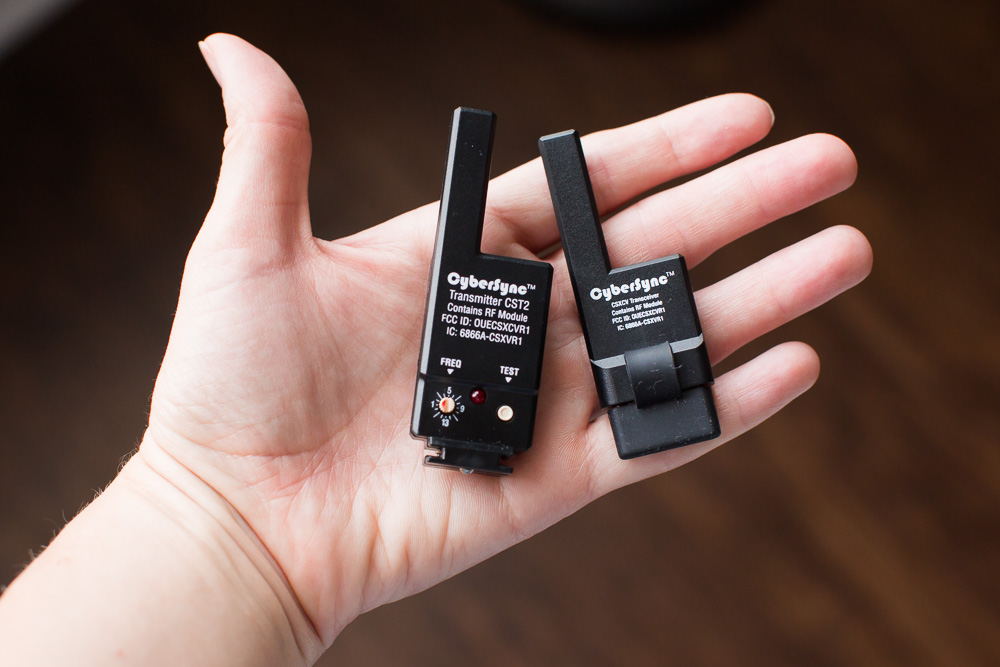 Put the transceiver in that spot on top of the Einstein. 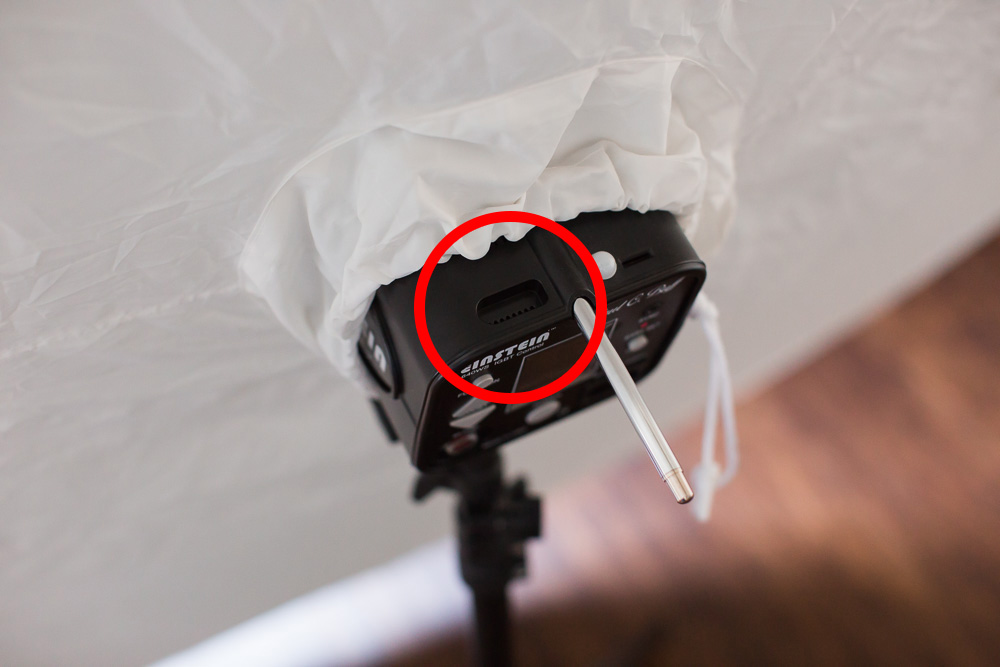 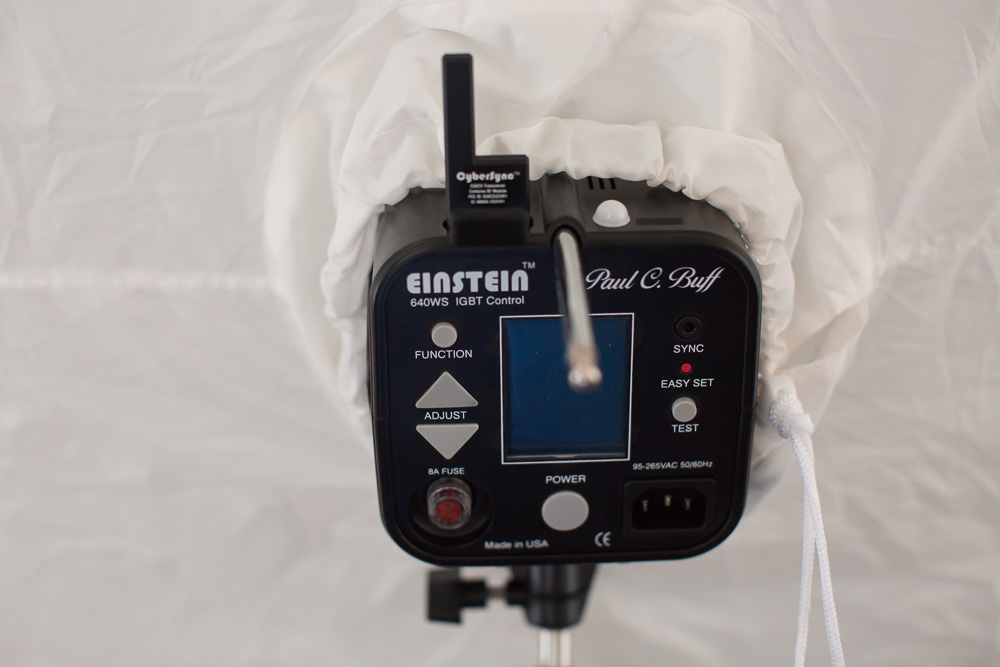 This transmitter goes on your camera’s hot shoe.

But first you’ll need to take the cover off and insert the CR2032 Lithium coin cell battery that should come with it. You can get extras anywhere (like these). Then put the cover back on. I recommend using a rubber band around the cover as they are extremely prone to breaking. 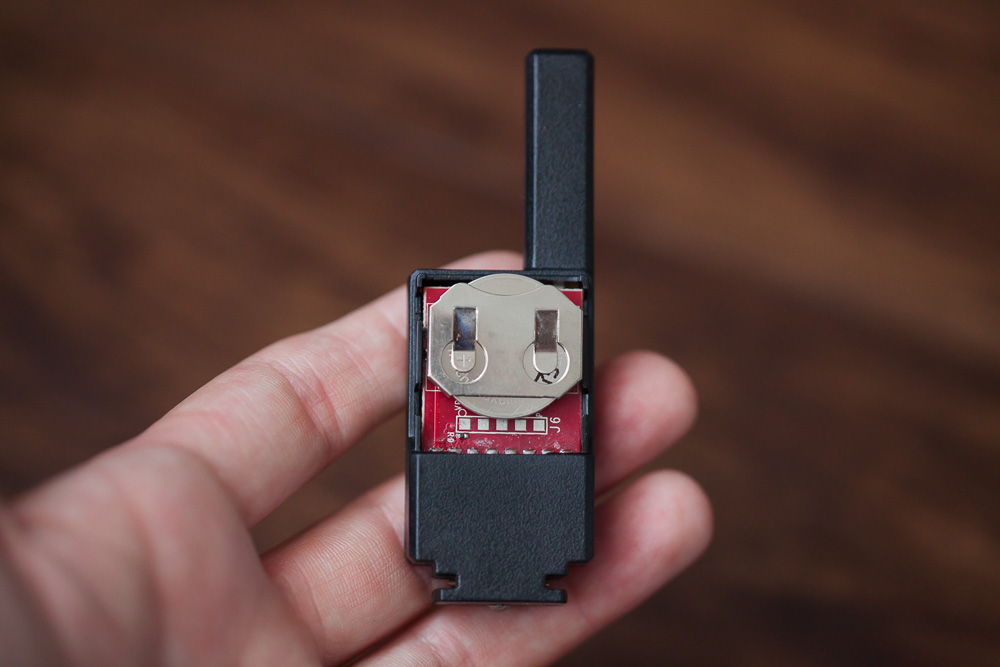 Then you can put it on the hot shoe of your camera. I didn’t have to do anything to turn it on, it just worked after one or two test shots. 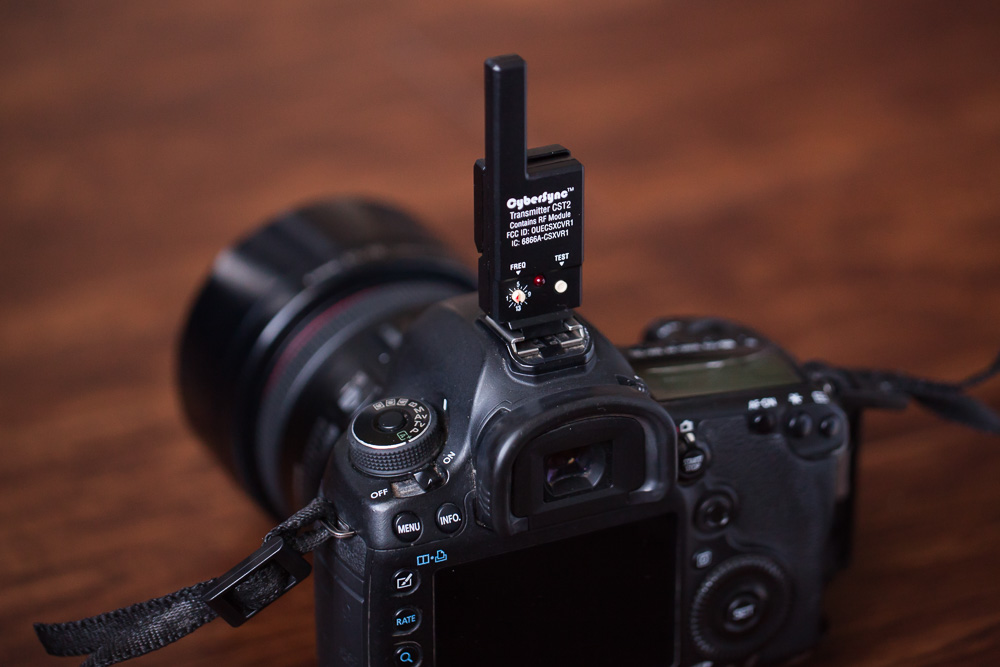 Plug in the power cord to the Einstein and to the wall or power source and you’re ready to go! 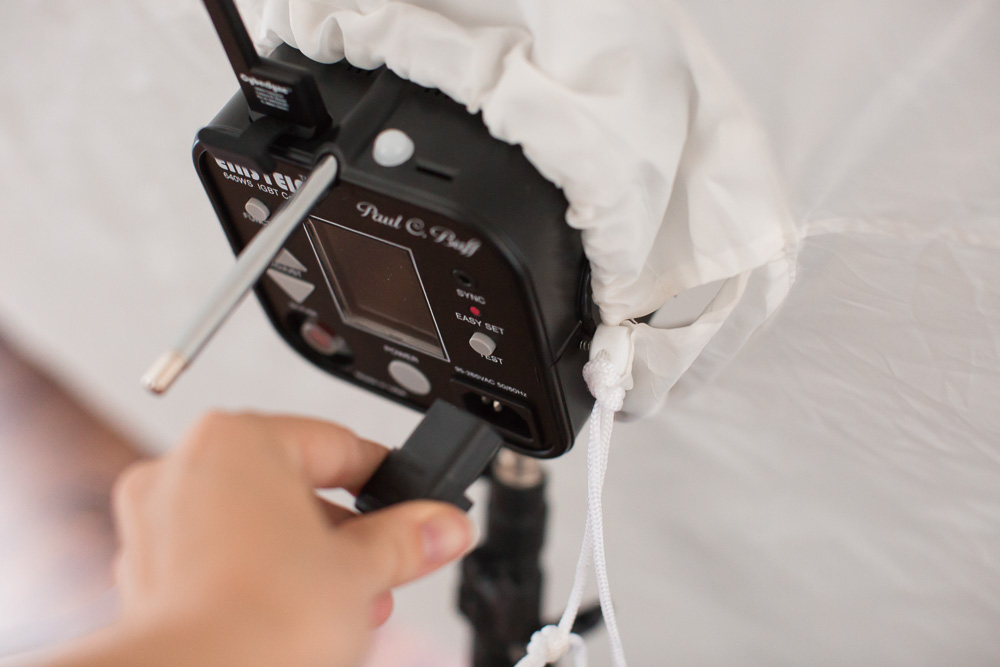 To turn on the light hit the power button. The modeling light is what is always on, and is much dimmer than the actual flash, which only flashes when you take a picture. To adjust both at the same time hit the adjust button while that top box is blue. 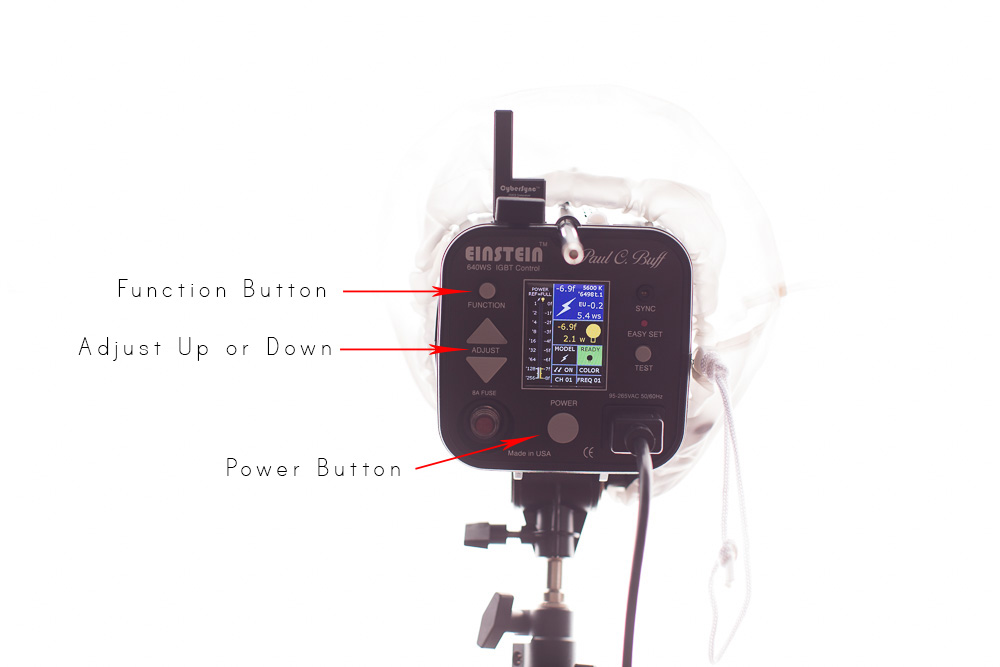 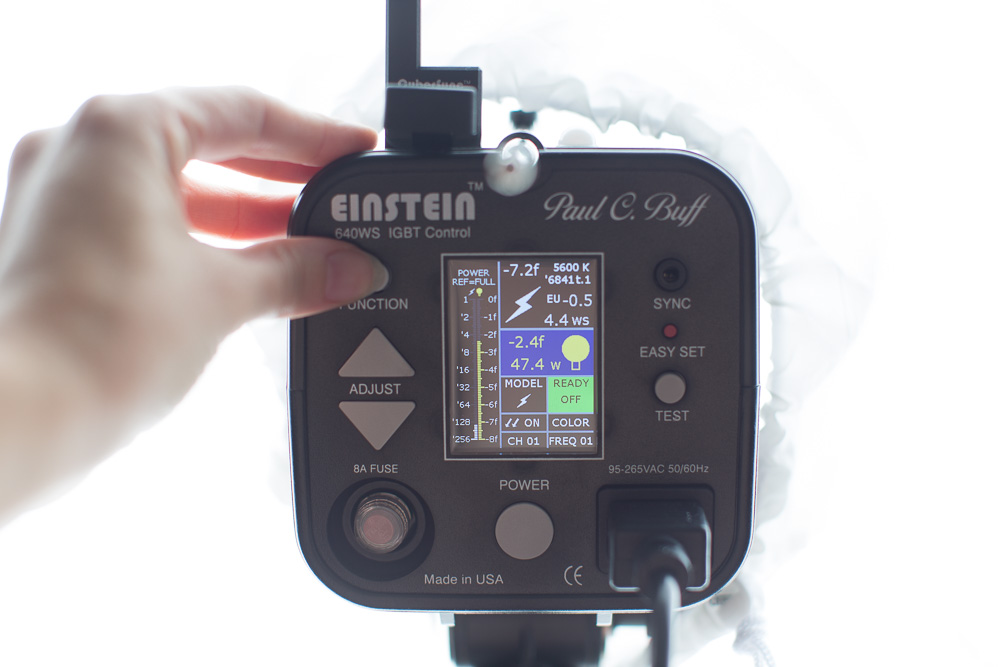 Hit function again several times until the box that says READY is blue (like below) and then you can turn on and off the beep and whether or not the modeling light powers down between shots. I keep this set at off. 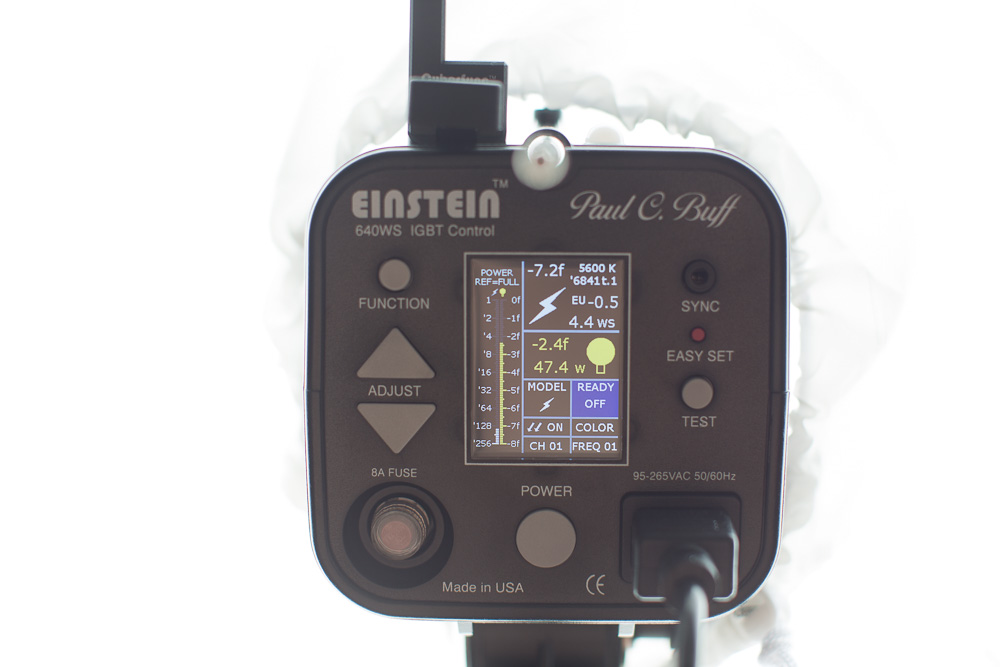 Last thing to note, eventually your modeling light and flash tube will burn out, just like any other light. I keep extras on hand for when that happens! You can get the modeling light here and the flash tube here.

Now you’re ready to experiment! Have fun! If you need some tips on how to light a newborn session you can look at this post!

Comprehensive list of everything I linked above:
Lightstand (this is what I currently use)
Avenger Lightstand (another stand people like, but I don’t have)
Carrying bag
Einstein Flash unit
86″ Umbrella
Black outer cover
Diffusion fabric
Transmitter
Transceiver
Modeling lamp (extra)
Flashtube (extra)
Batteries

22 thoughts on “Setting up your Paul C Buff Einstein and PLM!”